From August 21-26, an international scientific conference "OTHA-2022: Modern Methods, Problems, and Applications of Operator Theory and Harmonic Analysis XII" was held at the Southern Federal University. It was dedicated to the 80th birthday of Professor Nikolai Karapetyants (1942-2005).
N. K. Karapetyants's scientific results have gained wide international recognition. He was a frequent guest speaker at conferences in Russia, Armenia, Belarus, Germany, Mexico, and Portugal. The author of more than 100 scientific papers and two monographs, he obtained a number of fundamental results in the theory of integral equations, in the theory of Fredholm operators and functional spaces. For many years he chaired the Department of Differential and Integral Equations and the Academic Seminar, and trained students, who later became independent scientists.

The conference "OTHA-2022" in 2021 was given a status of a satellite conference of the International Congress of Mathematicians (ICM 2022). Selected papers of OTHA-2022 participants will be considered for publication in the Journal of Mathematical Sciences (Series A) - Editor-in-Chief A.N. Karapetyants.

One of the sections of the conference was also dedicated to the memory of the outstanding mathematician Mikhail Mikhailovich Dragilev. This year marks the 100th anniversary of the birth of Mikhail Mikhailovich Dragilev, the Doctor of Physical and Mathematical Sciences, professor at the Department of Theory of Functions and Functional Analysis of SFedU. He is the author of more than 50 scientific papers, including a monograph. M. Dragilev was the first who obtained characterization of infinite-dimensional locally convex spaces with absolute and only absolute bases, and he was also a pioneer in solving singularity problem with exact equivalence of unconditional basis in topological vector space.

The organizer of the conference and Chairman of the Program Committee of the conference is Alexey Karapetyants, Doctor of Physics and Mathematics, Director of RMC of SFedU, Professor of IMM&CS of SFedU. The Conference is included in the Program of Development of the Regional Scientific and Educational Mathematical Center of Southern Federal University and supported by the corresponding project of the Ministry of Education and Science of Russia, agreement № 075-02-2022-893. A significant number of participants, including young scientists and plenary lecturers received financial support for participation in the conference.

The topics of this conference were related to various interrelated areas of fundamental mathematics: aspects of harmonic analysis and operator theory, elliptic equations, approximation theory, theory of partial differential equations, models and methods in probability theory, and others.

The conference attracted leading experts from different regions of Russia as well as from Portugal, Belarus, UAE, Mexico, Georgia, Spain, Syria, and other countries.

The participants were welcomed by Mikhail Karyakin, Director of the I.I. Vorovich Institute of Mathematics, Mechanics, and Computer Sciences of the Southern Federal University.

During the conference four parallel sections were working: Functional analysis, theory of operators and theory of approximations; Differential equations and mathematical physics; Theory of functions and functional spaces (in memory of M.M.Dragilev); Probabilistic analytical models and methods.

The conference program included reports by invited experts, as well as presentations by 15 young scientists in the sections.

There was also an opportunity for young scientists to present their future theses and discuss the possibility of defending them in the Council of the Southern Federal University.

The lectures of the plenary lecturers were recorded. After due editing, the lectures will be posted on the Internet on the conference channel ( https://www.youtube.com/channel/UCMC1h55SjWn5hkRShZ7fhEw ).

In order to acquaint guests with ethnography, history and traditions of the Don region, conference organizers conducted a boat trip on the Don river with participation of Cossack folk song ensemble, excursion to Taganrog city with visiting museums. 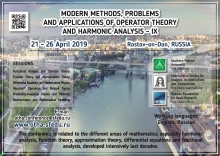