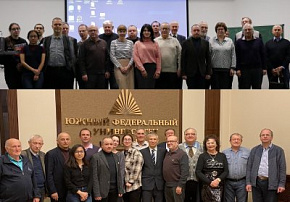 At the closing event, Alexey Karapetyants, director of the RMC and organizer of the OTHA-Fall 2022 workshop, shared with colleagues the scientific achievements and results of the Center for 2022, presented 4 special issues in leading scientific journals, and spoke about the results of the Journal of Mathematical Sciences (Series A) in 2022.